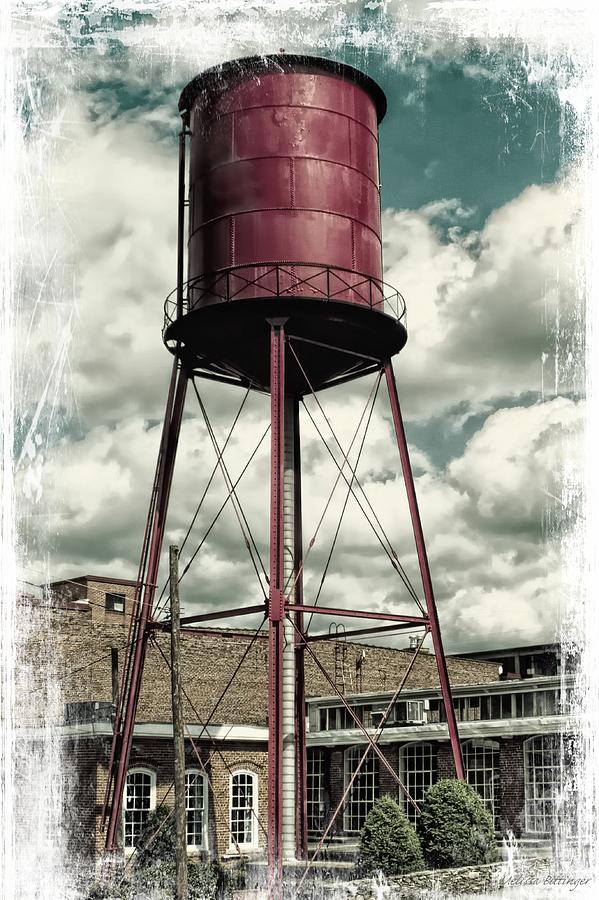 Red water tower in front of part of the renovated Revolution Mill in Greensboro North Carolina. Applied vintage and aged effects gives nod to the historical age of the building and structure.

Revolution Mill was part of the larger Cone Mills complex. Cone Mills was a venture by two brothers, Moses and Caesar Cone. They partnered with Emanuel and Herman Sternberger and in 1898 built the first factory to produce flannel in the South, which was a revolutionary idea for the times. By 1930, Revolution Mill had become the largest exclusive flannel producer in the world.

This hugely successful venture lasted up until 1982 when the plant was closed due in part to the decrease in popularity for flannel and the waning of North Carolina's textile manufacturing over time. The buildings were later added to the National Register of Historic Places.

Currently, the 600,000 square foot complex is in the midst of a revitalization program that on completion will be a mix of apartments and businesses with plans for a dog park, walking and bike trails, outdoor entertainment area and more. This is a huge undertaking and is about a third of the way finished.

It is truly spectacular in my opinion, to see revitalization of such a historic property that was so influential to the growth and prosperity of Greensboro in the early 1900's. I hope all cities can experience the same in the future.